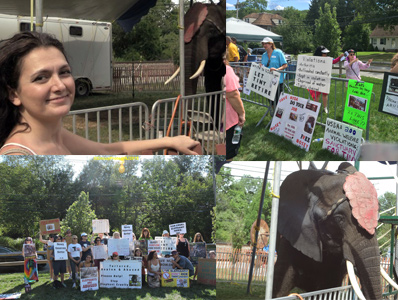 This summer I went to my very first protest in the USA, in Wharton New Jersey.  I attended a fair with about 35 other animal activists and we held a peaceful protest against the use of animals for “entertainment” in circus’s.

At this fair was a majestic elephant named Nosey whose story I learned about on facebook this earlier this year.   It really astounds me how these massive and beautiful these creatures are, and despite their immense size they live such a badly abused and tortured existence.

There was a horrific pinnacle event that really got a lot more people aware and involved in protesting animals used in circus’s.  In 1994, an elephant named Tyke went crazy and killed her handler and went running through the streets of Hawaii.  Tyke was killed dead eventually by 86 gunshots in the most gruesome and horrific death.  Animals who are trained to perform tricks are often done under abuse, threat of abuse, withholding of food and other severe and cruel coercion tactics.  Thankfully, Hawaii just this week passed a ban on the use of animals in circus’s, twenty long years after the tragedy of Tyke.

Nosey was brought to the US when she was very young, and sold to a family who is a traveling circus of sorts.  She has been traveling all over the continental USA giving performances and giving rides to children and grown adults for 8 hour long days, and this has been her existence these last 35 years.  Nosey’s owner has been cited by the USDA for over 200 violations, despite this we have not been able to get Nosey released to a sanctuary yet.  There are a few facebook groups with thousands of members who write letters, emails and make calls to the USDA, the president and their congress people to do something to end Nosey’s suffering as soon as possible. Still to no avail, but we all still persevere for Nosey.

I took this video trying to talk to Nosey and send her my love, when her owner noticed her tuning in to me and flapping her ears, he pulled her ear and pushed her with the horrendous jagged bull hook in his hand.

Also in the playlist of videos, I took video of Nosey after a long day of giving rides in the blazing summer heat. Her foot is clearly ailing her. She has been working in a traveling circus for far too long and is in desperate need of appropriate medical attention and solace in an elephant sanctuary, there is one in Tennessee that is holding a space open for Nosey to come live the rest of her days there.

That day in Wharton New Jersey I met an amazing group of people who have hearts of pure gold.  There were so many of us, and as people approached Nosey to take rides we would swiftly educate them on the torture that animals have endured to become docile enough to allow rides.  We didn’t get Nosey sent to the sanctuary but at least we stopped a few people that day from taking rides on her.

Events to participate in;

20/20 ABC news did a story about Nosey and all the baby elephants that were imported to Florida at the time in the 1980’s, this twitter storm is to capture ABC’s attention to do an update story on Nosey and the terrible injustices she has suffered.

This is 20/20’s first story about Nosey and other baby elephants being imported to the USA.